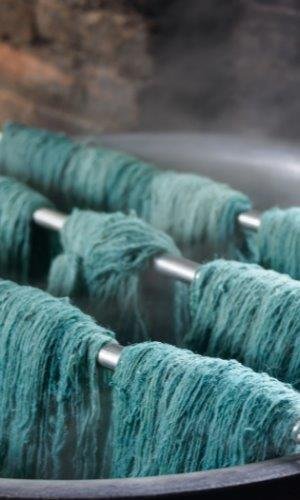 In former times dyeing was a heredity craft practiced by a few respected specialists. In last hundreds of years, since introduction of synthetic dyes, much traditional knowledge relating to the old method has been lost. Some of this knowledge has been recovered by chemical analysis of small samples of colored wool taken from carpets and flat weave kilims. A dye chemist can tell us the mordant ( a metallic salt used to attach the dye to the fiber ), the nature of the dyestuff, and often the actual species from which it was derived, but knowing the ingredients is not the same as knowing the recipe. There is still much to be learned about the old dying yarn technology. In our modern rug production, we try to use the same methods as old technology as much as we can.

Indigo is the main plant to obtain Blue. The name comes from the ancient Greek word from Indian. For thousands of years the indigo plant, “Indigofera tinctoria “, which requires a sub-tropical climate, has been cultivated in India. Another source of blue dye was dyer’s woad, Isatis tinctoria , native to eastern Europe, which was known in pre-Roman Britain.

The most common and important source is madder plants, “ Rubia tinctorum “ , which is easy to cultivate. The dyestuff is in the roots. They are dug out, dried, and then ground into a powder.

Madder contains not one but at least six dyestuffs, three major and three minors, which between them produce a remarkable range of colors.

One of the few plats known to have been used by dyers in former timers, weld ( Reseda luteola ) is one of the best. With alum mordant it gives an extremely light-fast yellow. Henna leaves is also common good source for orange yellow color and also by over dying madder root red with weld yellow.

Saffron is also one of the expensive and rare source in certain parts of the world (Specially in Iran, South of Caucasus, some part of Turkey) for oranges and yellows.

Also, original dark color wool can use a black color.

Walnut hulls, oak bark and some nutshells can be good source for brown color dye. However, the wool of brown sheep was also use as brown color.