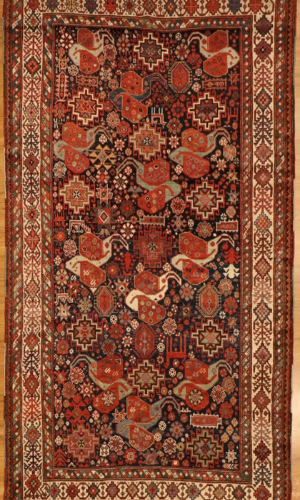 The early history of the Qashqai people remains obscure. They speak a Turkic dialect similar to that of Azerbaijan, and may have migrated to the Fars province from the north during the thirteenth century, possibly driven by the Mongol invasion. Karim Khan Zand appointed the chief of the Chahilu clan as the first Il-Khan of the Qashqai. The most important subtribes are the Qashguli, Shishbuluki, Darashuri, Farsimadan, and Amaleh. The Gallanzan, Rahimi, and Ikdir produce rugs of intermediate quality. The rugs woven by the Safi Khani and Bulli subtribes are considered among the highest quality rugs. The rugs are all wool, usually with ivory warps, which distinguishes Qashqai from Khamseh rugs. Qashqai rugs use asymmetric knots, while Gabbeh rugs woven by Qashqai more often use symmetric knots. Alternate warps are deeply depressed. Wefts are in natural colors or dyed red. The selvedges are overcast in wool of different colors, creating a “barber pole” pattern, and are sometimes adorned with woolen tassels. Both ends of the rug have narrow, striped flat-woven kilims. Workshops were established in the nineteenth century already around the town of Firuzabad. Rugs with repeating boteh and the Herati pattern, medallion, as well as prayer rug designs resembling the millefleurs patterns of Indian rugs were woven in these manufactures. The Herati design may sometimes appear to be disjointed and fragmented. The Qashqai are also known for their flatweaves, and for their production of smaller, pile-woven saddle bags, flat-woven larger bags (mafrash), and their Gabbeh rugs.

The Shishbuluki (lit.: “six districts”) rugs are distinguished by small, central, lozenge-shaped medallions surrounded by small figures aligned in concentric lozenges radiating from the center. The field is most often red, details are often woven in yellow or ivory. Darashuri rugs are similar to those of the Shishbuluki, but not so finely woven.

As the truly nomadic way of life has virtually come to an end during the twentieth century, most Qashqai rugs are now woven in villages, using vertical looms, cotton warps, or even an all-cotton foundation. They use a variety of designs associated with the Qashqai tradition, but it is rarely possible to attribute a specific rug to a specific tribal tradition. Many patterns, including the “Qashqai medallion” previously thought to represent genuine nomadic design traditions, have been shown to be of town manufacture origin, and were integrated into the rural village traditions by a process of stylization.

The revival of natural dyeing has had a major impact on Qashqai rug production. Initiated in Shiraz during the 1990s by master dyers as Abbas Sayahi, particularly Gabbeh rugs raised much interest when they were first presented at the Great Persian Exhibition in 1992. Initially woven for home use and local trade, coarsely knotted with symmetric knots, the colours initially seen were mostly natural shades of wool. With the revival of natural colours, Gabbeh from Fars province soon were produced in a full range of colours. They met the Western demand for primitive, naïve folk art as opposed to elaborate commercialized designs, and gained high popularity. In the commercial production of today, the Gabbeh rug patterns remain simple, but tend to show more modern types of design.